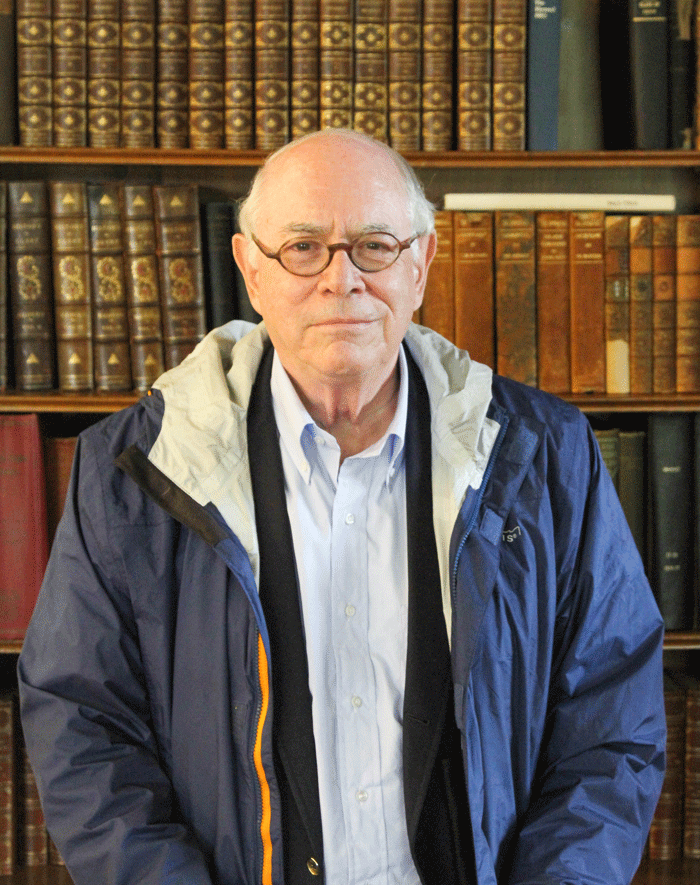 Stephen Pflaum ’62, P’04, ’93 recalls the first time he laid eyes on Amherst. It was the moment he arrived on campus for the start of his freshman year. He arrived by train—actually several trains that connected him from Minneapolis to Chicago, Chicago to Albany, and Albany to Springfield—and a bus for the final stretch to the College. “I remember how beautiful it was,” he said, “as well as the challenge of getting to Morrow Dormitory with all of my luggage.”

Pflaum was not familiar with Amherst before his arrival. He remembered a conversation with the headmaster of the Blake School, the preparatory school he attended in Minneapolis: “I told him that I wanted to go to the best college I could,” said Pflaum, “and he told me that would be Amherst or Harvard.” Pflaum was accepted at both. He judged that he would be happier at a small school and enrolled at Amherst. “Then and now, Amherst has the advantage of very small classes and faculty members that know you on a first name basis,” he said.

Pflaum chose to major in political science. He studied with some of Amherst’s legendary professors in that discipline—George Kateb, Earl Latham, Karl Loewenstein, and Ben Zeigler. Pflaum credits recommendations from these faculty members, who had significant reputations beyond the College, for his successful applications to law school at both Harvard and Yale. “I have the dubious distinction of having turned down Harvard twice,” Pflaum noted wryly. He graduated with an LLB from Yale in 1965 and went on to study for a year at the London School of Economics in 1966.

Pflaum is now a partner at Stinson Leonard Street and has practiced corporate law in Minneapolis for more than fifty years. During that time he has served as a director of and general counsel to a number of privately owned business corporations and public, nonprofit, and charitable organizations. He still serves on several corporate boards and is a life trustee of the University of Minnesota Foundation.

Pflaum also has spent a lot of time over the last two decades interviewing and recruiting students for Amherst. He considers this work a labor of love and believes students are the key to maintaining Amherst's position as one of the best liberal arts colleges in the country. “What makes Amherst so special is a combination of brilliant minds and an incredibly rich mix of truly qualified, bright kids from a huge variety of backgrounds,” he said. “The chemistry that this produces and the interplay of those minds set the College apart.”

When Amherst’s Board of Trustees awarded Pflaum the Medal of Eminent Service for his admissions-related work in 2005, the number of students he had successfully recruited who had enrolled and graduated was near sixty. That number has continued to grow in the ensuing years.

This is very gratifying for Pflaum, who sees a clear and direct link between Amherst’s founding and the College of today. “Amherst continues to take very seriously its original charter to educate young men for the ministry. Amherst Admission interprets that charter today to mean its applicants’ commitment to their community,” he said. “The College is looking for students who have been heavily involved in activities beyond the strict education they’re getting. A hefty percentage of students are committed to giving back—it’s a core value of the school.”

Pflaum has lived that value since his own Commencement ceremony in 1962: “I made a personal commitment to myself on graduation weekend to give back to the College before I died. I’ve been giving ever since.”

Pflaum surpassed his goal long ago, having adjusted it for inflation. He is a member of the 1821 Society, and he created the Nasser Hussain Prize, a permanently endowed prize fund that honors a graduating senior for distinguished achievement in the Department of Law, Jurisprudence, and Social Thought. Pflaum is also a Johnson Chapel Associate because he established a charitable remainder trust with the College. The trust will pay him and his spouse an income for life and eventually create a fund to support the efforts of the Office of Admission. It’s his way of giving back to a place for which he feels deep loyalty and affection.

“Admission into Amherst is a gift,” he said, “It was clear what I’d been given.”