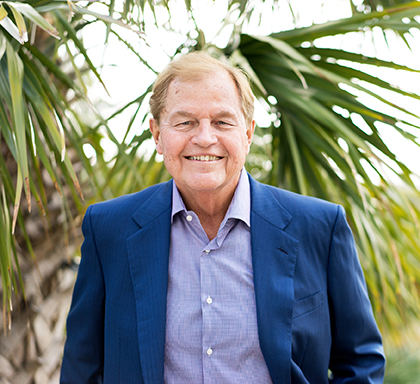 “I spent my entire first year in the Frost Library—I never left, it seems” says Dan Sullivan ’69. “Amherst, for me, was overwhelming at the beginning.”

But, to this visionary businessman who does not shy away from a challenge, the College on the Hill—and its legendary core curriculum—felt daunting. “It was scary at first, coming out of a public school in Waterbury, Connecticut,” Sullivan says. “But I learned to study, to think a little bit differently, and to adapt and react to the academic rigors, a process that helped me throughout my career and my life. I give Amherst full credit for any level of success I may have had.”

Sullivan cites “the intimacy of the place” as part of what made his Amherst education so powerful. “It was the people, the coaches, the small classes, the one-on-one interactions with the professors, the friendships you built,” he says. “I often think about my time at Amherst, and what it meant to me. It was one of the greatest experiences of my life. I’ve probably never changed as much as I did there.”

Something that has stayed constant in Sullivan’s post-Amherst life is his commitment to giving back to the College. With 47 years of consecutive giving to the Annual Fund and a generous bequest in his estate plans, Sullivan feels strongly about making his appreciation for the College concrete: “If you come away loving Amherst, it’s important to say thank you in some way. I’ve tried to do that through the years.”

Even in his retirement, Sullivan has a robust relationship with challenge and change. He is the chairman of two boards, does private equity work and private investing, and travels a good deal. As he reflects on his own experience, Sullivan hopes that students at the College today take full advantage of all that Amherst offers: “When in business for more than 45 years, you learn that you must listen to all points of view before making decisions. You most often have a certain understanding of specific issues but, at the same time, can’t shrink from considering the perspectives of others. My advice for any Amherst student is to communicate with people who are not exactly like you. Seek out contrary opinion and participate in as many different experiences as you can.”