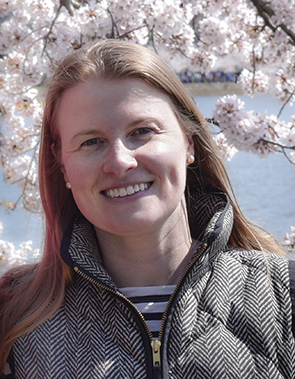 During a first-year seminar in the fall of 2002, the professor asked who had voted in the mid-term elections held that week. Ceridwen Cherry was one of only a few students to raise a hand. Having grown up in Australia, where voting is compulsory, Cherry (who holds dual citizenship) put registering to vote at the top of her to-do list upon arriving at Amherst. “It seemed obvious that that’s the first thing you do,” she recalls.

It’s no wonder that after graduating summa cum laude from Amherst with a bachelor’s degree in history and completing a joint degree program that combined a Master in Public Policy (MPP) at the Harvard Kennedy School of Government and a law degree at the University of Michigan, Cherry now works as an associate in the political law group of the national law firm Perkins Coie. Her practice focuses on voting rights litigation at both the trial and appellate levels. She recently secured a significant victory in Wisconsin striking down eight newly-enacted voting restrictions, and served as an election lawyer for the Hillary Rodham Clinton presidential campaign.

So how did a young woman from Down Under end up defending voter rights in America by way of Amherst College? Cherry’s parents and step-parents are all academics and proponents of the liberal arts model. With grandparents in Easthampton, Massachusetts, where she spent summers, Cherry was familiar with the Pioneer Valley and its colleges. Amherst’s small size appealed to her. “You can’t slip through the cracks at Amherst,” she says. “That felt important being so far from home.”

In that close-knit, residential community, Cherry’s vision for her future first became clear. “Because I was educated in Australia, I missed a lot of U.S. history,” she says. The College’s open curriculum allowed her to fill in those gaps. “Professor Couvares’s course on the 1960s in America was key—everything I do now is tied to the Voting Rights Act of 1965.” She also spent a summer on campus reading George Washington’s diaries as part of a research project with Professor Martha Saxton. “Things fell into place at Amherst,” she says, “and I realized how much needed to be done.”

Cherry’s sense of commitment extends to Amherst as well. She has given to the Annual Fund every year since graduation, volunteers as an associate agent to the Fund and as a mentor in the Pathways program, and has included the College in her estate plans. “It’s important for my husband and me to include our alma maters in our will. We have no idea what our estate will look like in 60 years, but it’s a priority to include Amherst. And it’s good to know in advance that I’m going to be able to help in the ways that I can.”

Cherry is grateful for the opportunities the College has given her. “Thanks to my education at Amherst, both in and out of the classroom, I've always felt prepared for what life has thrown my way.” Her generosity is also driven by the hope that others can enjoy those same chances to discover and chart the course of their life. “I didn’t know before I arrived how strong Amherst’s financial aid policies are,” Cherry says. “As a Resident Counselor (RC), I saw first-hand how vital that support is for many students. It’s very important to me that Amherst continues to be a leader in terms of access and opportunity.”