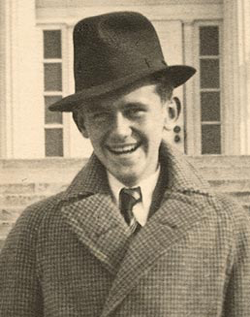 In 2007, a call came to Amherst from the estate of Dwight Goldthorpe ’41. The attorney on the line said that Goldthorpe, who had lived a quiet, unassuming life in Palm Beach, Florida, had died weeks earlier at age 87. The lawyer explained that Goldthorpe had willed two-thirds of his residuary estate to the college. The gift—$23 million—represented the single largest bequest to Amherst in history. It came as a surprise to everyone on campus.

In accordance with Goldthorpe’s wishes that his bequest be used either for the addition of a new facility or to expand an existing building, his gift was used to fund the new Greenway Projects.

Goldthorpe was a private investor for many years. After Amherst, he spent a year at Harvard Business School until, like many of his classmates, he entered the military. He served in the U.S. Navy from 1942 to 1946, attaining the rank of lieutenant. After a brief stint on Wall Street, Goldthorpe became an independent investor. In the early 1950s, he moved to Palm Beach, where he was a champion tennis player at local clubs over the next several decades.

As an Amherst student, Goldthorpe played squash and tennis, served as manager of the swim team and joined Theta Xi.

Goldthorpe’s estate plan had included the college for 40 years or more, according to his attorney. Goldthorpe held Amherst in high esteem, greatly valued the education he’d received and always spoke well of the college to those who knew him in Florida.

Goldthorpe’s estate mailed three boxes of his personal belongings to the college. They included a thick stack of Amherst football programs, indicating that Goldthorpe regularly attended home games on Pratt Field. The programs date from the 1950s through the 1990s, with final scores written in by hand. The package also included Goldthorpe’s framed Amherst diploma, several copies of the Olio and an Amherst varsity letter still in its original plastic bag.